...loads of fruit with little work.

Julie nudges me awake from a deep sleep in our roomy car. We have slept the night across the road from Taramea Bay in Riverton. Relocating further south, after re-arranging our belongings from the front seats back to where we had slept, we end up at Howell's Point. As we relax and eat our breakfast, a pack of Hector's dolphins glide into the calmer waters of the bay to rest before heading back out to sea.

Today is the kick-off to Riverton's 175th birthday and the town is buzzing with excitement. The main street is closed off for festivities and residents crowd around live music being performed on the back of a vintage truck. As the parade makes its way through town, Julie notices a family dressed up in settler type clothing and riding antique bicycles. It turns out that they are our next wwoofing hosts, the Guyton family. After the parade we make our way through the busy street to the Environment Centre where we meet Robin Guyton. She is busy organizing a scavenger hunt for the town's folks. Later we are introduced to Robert, her husband, and their children, Terry, Adam and Holly. After some quick small talk, they all have duties to attend to and we are left to further explore the sites and sounds of Riverton. Riverton turns out to have an interesting history as New Zealand's old whaling harbour. 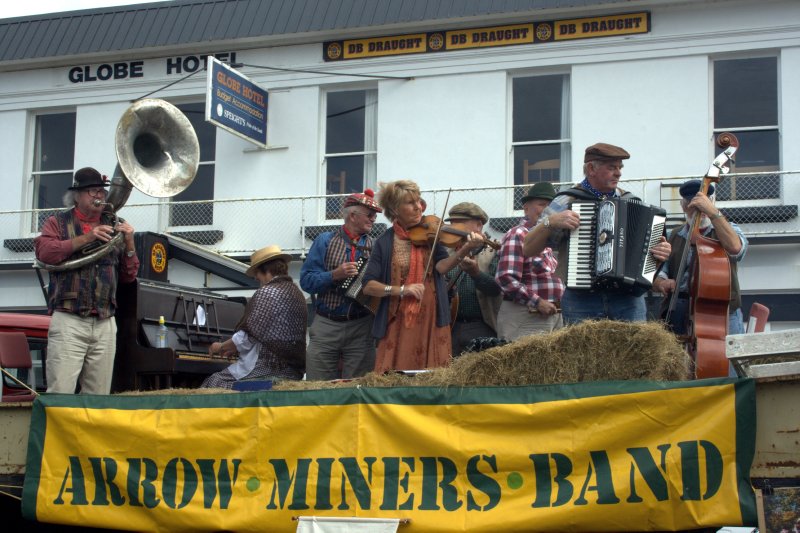 We return to see if there is anything Robin needs a hand with and she instructs us to jump on the bikes and hurry to the start of the second parade. Yes, we road the old bikes, with their handmade detailed leather seats, down the main street with Robert and Holly, waving and laughing all the way. Funny thing is, due to some misunderstanding, half of the parade started from the north end of town and the other half started from the south end of town! So the two parades met in the middle, laughing at the circumstances. 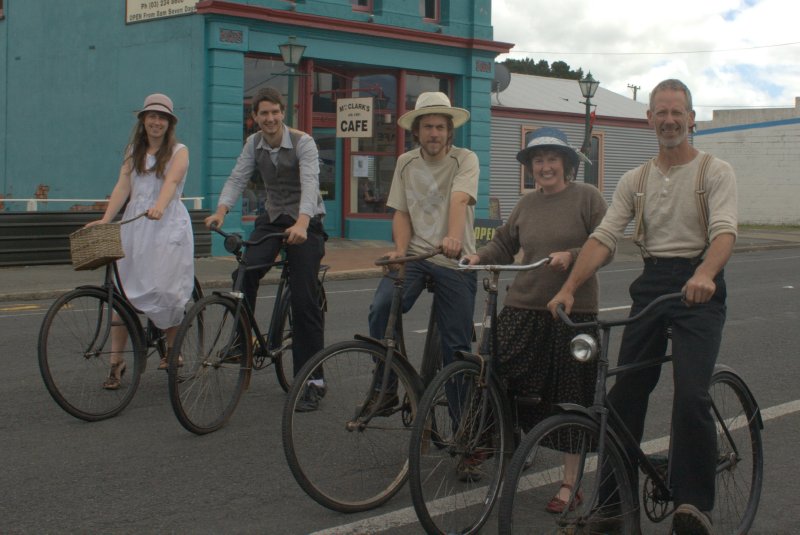 Once the festivities die down, we make our way to the Guyton's house to settle in. They live on approximately an acre of land that they cleared of gorse and broom (invasive plants) around twenty years ago and slowly built and grew their dream. Robin always wanted an old rustic house with character but they couldn't afford to buy this. So piece by piece they salvaged and reclaimed building materials from houses being torn down in the area to build their amazing home which is full of character. They have an old toilet with the tank located close to the ceiling, and there are stained glass windows, antique light switches, and beautiful old wooden doors. Amazingly they don't have a fridge, instead they have a neat old “cold box” which they place ice packs into. Yes, they do have a freezer.

Their property is based on permaculture principles. They have planted a vast array of fruit trees, berries and native plants all coming together to form the “Food Forest” that surrounds the house. No weeding is involved, no lawns need to be mowed, but every few days a stroll through the forest is taken to pick fresh, organic fruit and nuts from the trees. This is the life! And they have veggie gardens placed within a clearing in the forest which need additional care. 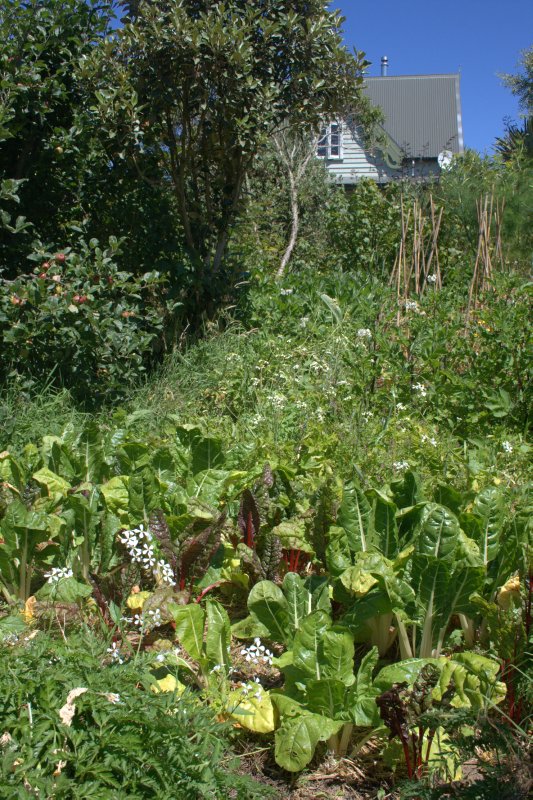 Food Forest and The Guyton Home

After getting to know them over the course of the evening we learn that they are very driven people and have their hands in many different community projects. Robert was a teacher turned writer and plays an active role as a Riverton Councillor that truly cares for the environment and the future of the town. Robin was also a teacher and started the Riverton Environment Centre. The Centre is a place where people can shop for organic products and learn how to live a sustainable and wholesome lifestyle from their extensive library and project display boards. Their children, Adam and Holly, are extremely knowledgeable and are very in tune with the earthy ways taught by their parents.

Throughout our stay we pick up heaps of red and black currents, raspberries, plums, and apples. We help plant new gardens, harvest their organic vegetables, remove overloaded apple tree limbs, and transplant black current cuttings to propagate for sale at the Environment Centre. Julie also helps out at the Environment Centre, learning all about the multiple projects happening in the town. I get the task of laying slate tile in the laundry room to finish a job that Robin has wanted to complete for 15 years. While working with Robert, conversation about his hobby of collecting non-electrical old tools peaks a lot of interest in Julie. They are collecting these tools because human's have a huge reliance on electricity and therefore oil and oil is unsustainable and will run out at some point. Even sustainable energy, such as wind farms, rely on oil to be built. Non-electrical tools are important as they use human energy rather than unsustainable energy and will become essential once again in the future. The Guyton's are one step ahead of everyone else on this planet! Sounds like work around our house might take a bit more elbow grease when we return. 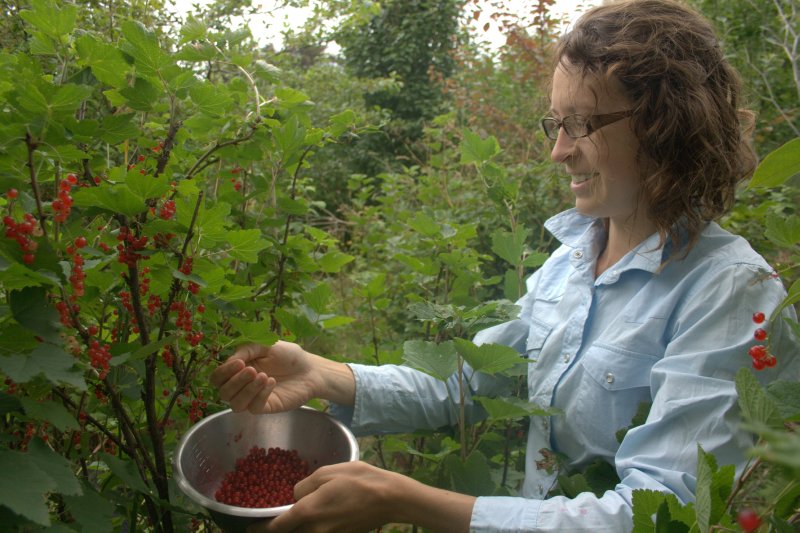 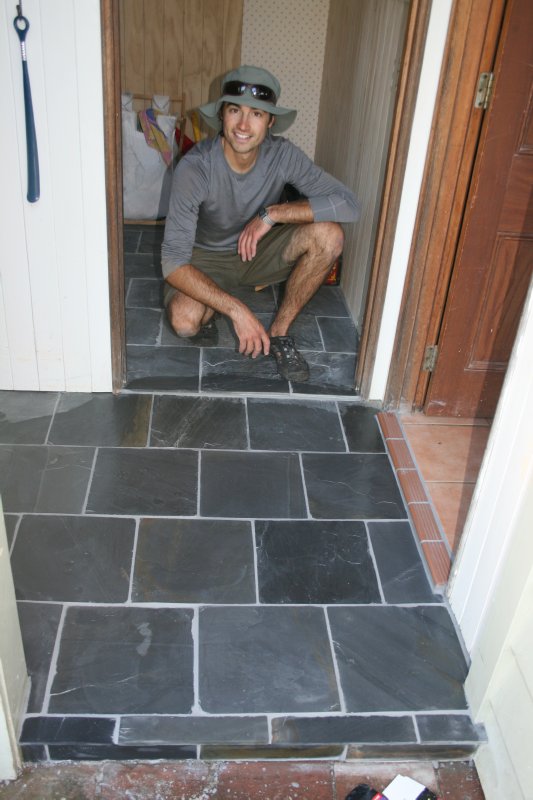 The Guytons have many projects on the go, all linked to sustainability. Two of the projects include saving heirloom seeds and saving heritage Southland apple trees. To save the apple trees, they take cuttings and graft them onto root stock suitable for the growing conditions. The purpose of both of these projects is to prevent the species from going extinct. Most of the varieties of vegetables grown in the 1900's are now extinct. There are many reasons to explain why this is occurring, one of them being monoculture farming. 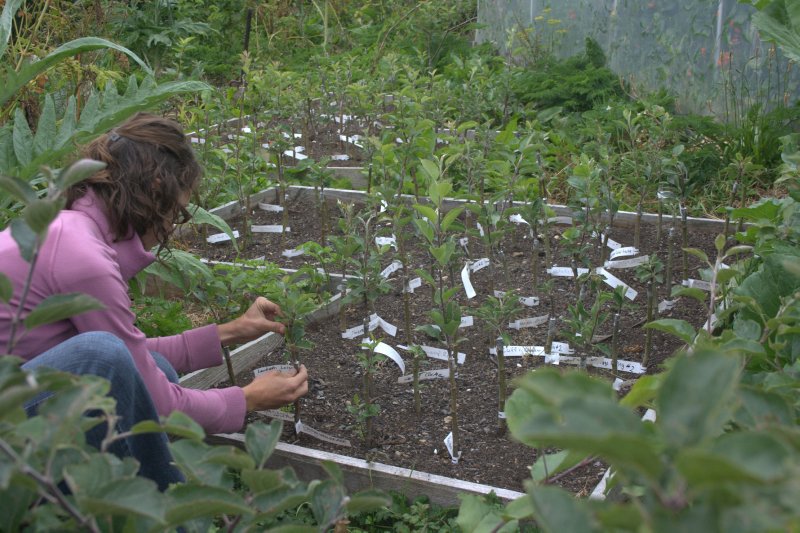 A third project, which is more Robert's responsibility is called Te Wai Korari Wetland Reserve. He takes us to the property along the estuary that they saved from becoming farmland. Restoration efforts such as planting native vegetation, creating wetlands, and realigning the stream have taken place with the help of a hydrologist's expertise. This restoration was completed to provide fish habitat, especially to provide breeding grounds for native fish. It was a giant effort and the results have slowly become successful as the area bustles with life. 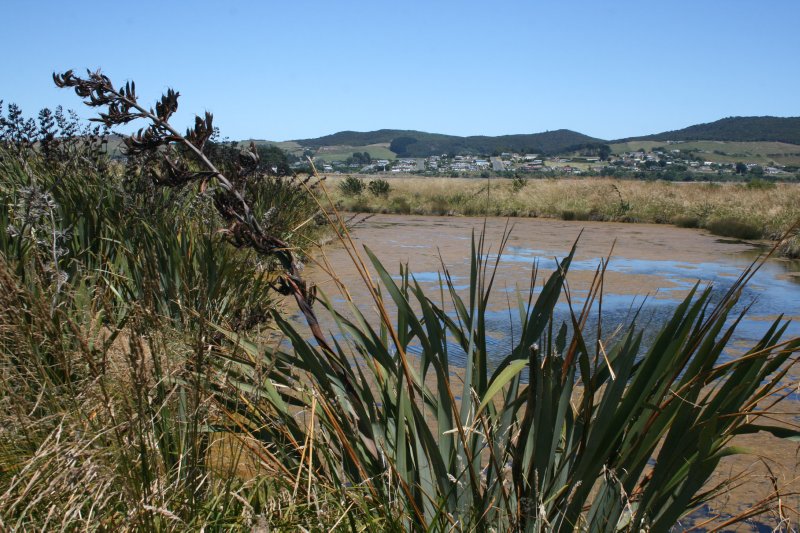 One sunny afternoon I finally feed my urge to stroll along Gemstone Beach, since I have a serious problem of collecting rocks throughout our travels. It is a neat area, rich with tumbled stones ripe for the picking. I find and select only the best gems to keep, since Julie isn't fond of loading down our car with my habits. The beach is flanked with sandstone cliffs marbled with orange and yellow colours. On one such cliff a cottage is carved into soft stone with a window facing the ocean. We watch a local hunting for gold flakes with his elaborate homemade sluicing set-up before heading back to the Guytons. 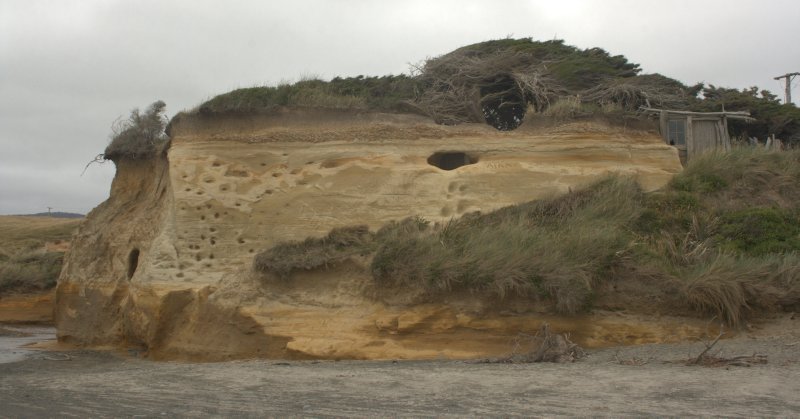 During our last night spent with the Guytons we resurrect a 120 year old candle lit magic lantern. It has small glass slides consisting of old nursery rhymes in coloured images that become projected quite vividly onto the wall of the darkened living room. The antique slide show is hilarious with the Guyton's commentary. This slide show is an unbelievably simple form of watching a movie and put us back in time.

They are a very inspiring bunch and love to educate anyone who is willing to listen. On our last day an opportunity arises for Julie to educate them while moving chooks. The Guytons usually carry chooks upside down by the legs causing the chickens to go wild. When Julie shows them how to hold multiple chooks in one hand, while the chooks remain calm they were ecstatic. Robert blogged this new found knowledge immediately! http://robertguyton.blogspot.com/2011/01/how-to-hold-hens.html

Over our days with the Guytons we spend tons of time talking about their past and future plans and projects. With lots of laughs, due to their never ending puns, we feel blessed to have wwoofed for them.

Previous Next Table of contents

What an interesting family! Love the photo of them on their antique bikes! Their place sounds amazing. It must take a lifetime to accomplish all that. And Julie, how did you learn to carry chickens? I looked at Robert's blog and saw the photo.

16 below today and dad is off skiing at Blue!

This blog requires you to be a logged in member of Travellerspoint to place comments.

If you aren't a member of Travellerspoint yet, you can join for free.